Images from The Northside House

By parProjects July 17, 2010
The initial success of The Northside House, our eclectic gallery space, which was nestled comfortably in the Northside community of Cincinnati is one of the main reasons we stay motivated to push on. We understand our value as a group and now know we have the talents to pull off great events that not only support the arts, but support ideas of community through creative outreach.

Below is a slideshow containing images from our inaugural event. 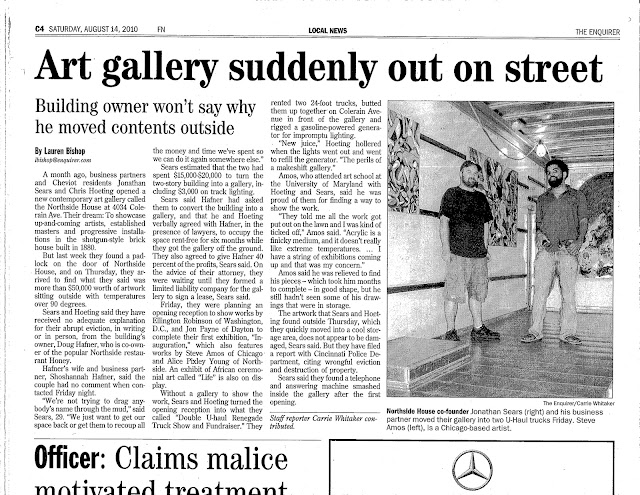 Articles that were written about The Northside House can also be found at:
+ http://www.citybeat.com/cincinnati/article-21324-on-the-house.html
(via City Beat)

How do these crazy dreamers expect they’ll be able to build an art and education space from nothing… in a city they’re still finding their voice in, with no huge donors lined up, no financial planners on board, and no experience in land development?

We were in our 20s, so our approach may very well have seemed overly-ambitious or even silly. But one thing most have realized by now is that we weren’t concerned. No risk, no reward. We knew we had a worthy mission. We knew we had good reason. And quite frankly, we now know we were some of the most determined artists, connected to some of the strongest artists, and unafraid to reach out to the more established artists to help us make things happen. This was to be an experiment on a grand scale, led by a tiny team of talent and determination.

Of course there were some questions. Who would respect artists trying to build community? Who would take a chance to work with creatives doing place-making projects, in 2010, before pl…
Post a Comment
Click here to Read a little more »

Still, as something major happened a few hours ago, we think it would be great if you planned…
Post a Comment
Click here to Read a little more »

By Jonathan Sears July 09, 2019
Because we can't (yet) offer all of our classes all of the time, we're asking our community to let us know what classes they'd be interested in seeing us offer in Kennedy Heights over the next year or two and what times would work best.

Please find our two minute survey below. And if interested in viewing class descriptions, please visit our website — www.parprojects.com/Education — for more information.

Thanks in advance for your participation!